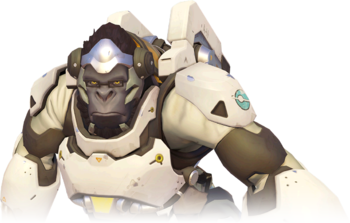 Did… someone say ‘peanut butter’?

He loved many things.

The swell of the orchestra as the music built to a crescendo was one of them. He lay in his hammock, his eyes closed, appreciating the ebb and flow of the most beautiful Adagio from Spartacus. Yes, he loved music.

(It is worthy of note that he also had a soft spot for bananas and went crazy over peanut butter, but that was incidental to the joy of classical music).

Winston sighed softly and let his arm hang loose, swinging easily to the rhythm and cadence of the tune. This piece was one of his absolute favourites. Harold, his handler, had introduced him to the pleasure of classical music so many years ago that he’d lost count. While some of the other specimens had barely responded to music, Winston had adored it. And this particular work always took him back to the heady days of his youth. It didn’t have the drama of, say, the Rite of Spring, nor the airiness of the Nutcracker Suite, but the tune was nonetheless a most welcome…

Neither did he recall the moment in the ballet that the girlish voice lifted in tuneful song, belting out one of the most popular K-pop tunes of the day occurred.

“Young people,” grumbled Winston in his deep baritone. “No respect.”

With easy grace, the gorilla rolled from his hammock and listened carefully to the endless drumbeat. He knew precisely where it was coming from and it was interfering with his rare moment of down time. He was feeling annoyed.

Annoyed, not angry. When Winston got angry, people knew about it.

“Do you want me to increase the volume, Winston?” He turned his head to the source of the voice and sighed.

“No, Athena,” he said, with reluctance. “It’s probably best not to ruin the optimal level for enjoyment.”

“I can turn down the other music remotely if that will help?”

It was tempting, certainly, to let the base’s AI interfere in this unlikely and sudden battle. Winston had still to get used to the newer members of the unit and this was no different. They’d exchanged very little in the way of words (‘LOL, you’re a gorilla’ and ‘GG, Winston’ being two of the more baffling phrases he’d encountered).

Hana spoke English beautifully but there were times when he wished she’d speak her native Korean more. He understood that more clearly than any of these bizarre Young People Acronyms. She seemed inordinately young to have taken up permanent residence on the team, but he couldn’t deny that her skills were more than welcome in these changing times.

He just found her so difficult to relate to. For the first time, he had grasped a reed-thin glimpse at what it must be like to be Commander Morrison when faced with the attitudes of a new generation.

“No, Athena, thank you. I will… speak to her personally.”

Moving at his easy lope, Winston made his way down the hallway to the young woman’s door. She had decorated it with a huge, golden star that contained more glitter than Winston had ever seen in his entire life. He was not keen on glitter. It got into the fur and made him look less than credible…

You’re an ape in a suit of armour, he thought, glumly. Don’t start talking about credibility.

He raised his knuckles and rapped on the door. Unconsciously, he was knocking in time to the drum beat. 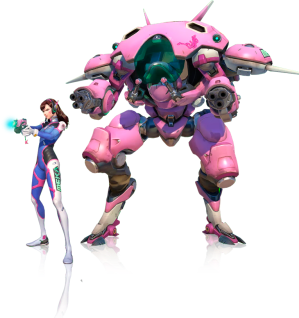 I play to win!

There was no reply, so he tried again, twice more. Both times nothing happened and with a low growl of minor irritation, Winston raised his fist to bang more loudly. As he did so, the door swung open to reveal Hana Song standing in front of him. She was chewing loudly on her customary bubble gum, a pair of fluorescent pink headphones perched on her head and a game controller in her right hand.

Everything the self-styled D-Va said was punctuated by exclamations. Two minutes of talking to her exhausted him so.

“Is my music too loud?! I’m sorry! I was playing this great game and totally like, arguing with someone over my headphones! I’ll turn it down!”

“I love this song! I forget there are other people here! Sorry!”

“I gotta go, I’m queuing for competitive play and people get, like, SO down on you if you get kicked! GG, Winston!”

The drums softened to a barely audible whisper of sound, but Winston found his eyelid still twitched in rhythm. He had barely understood a word of the conversation. He swivelled a digit in his ear thoughtfully and stared at Hana’s now-closed door before straightening the glasses on his nose, uttering yet another sigh and loping back to his own room.

“Of course, Winston. Would you like me to start from the beginning?”

He got sixteen bars in before it happened again.

The gorilla pulled a pillow over his face and whimpered. This, he knew with deep regret, was his own fault.