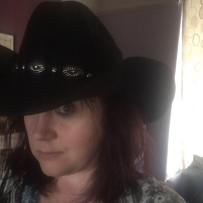 I’m an undercover agent for the FBI and have my own helicopter in the back yard. I know seventeen different variations of martial arts, am a fully paid-up member of the grammar police, can kill a man with a carefully directed stare and speak forty nine languages.

Actually, that may be a slight exaggeration. One of those statements may be true.

Wish it was the one about the helicopter, though.

By day, I am a slave to the National Health Service. By evening, night and early morning I am a freelance writer. Much of my back-library was predominately written for the Black Library which means I largely got to write about super-human, 7ft tall, heavily armoured killing machines with BIG guns, bigger swords and a collective mental age of about 15. It probably speaks volumes about me that this suits my personality down to the ground.

I also have a life-long obsession with Doc Holliday and the OK Corral.